Glen returned home to Tucson from Los Angeles to be with his mom and sisters after a family situation arose. Magnuson came to Tucson from Baltimore to visit his uncle and aunt. Zakharyan left Russia to live here with her dad.

Their diﬀ erent journeys led to a common destination: Downtown Campus, home to many of Pima’s Career and Technical Education programs, and future home of Pima’s new Center of Excellence in Applied Technology.

Glen is seeking a certificate to be an electrician. Magnuson and Zakharyan are seeking associate degrees, in Welding and Fabrication and Computer-Aided Design, respectively. All are adjusting career paths, driven by a desire for autonomy and financial stability.

Said Magnuson, who spent a decade working at high-end restaurants along Baltimore’s tony Inner Harbor: “I was almost 30 and making the same amount of money as I was at 20, but I had more bills and wanted to live a better lifestyle . . . I wanted room for growth and advancement. It was time for a change.” 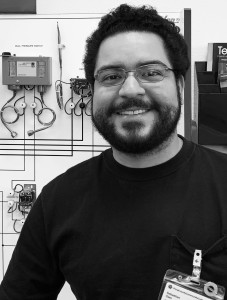 In Los Angeles in 2016, one month before beginning years of graduate study andcareer-building, unforeseen life circumstances forced Glen to re-evaluate. He could not provide the support his mom and two sisters needed if he stayed on the West Coast. He decided to return to Tucson and change careers.

He thought, “I’m going to focus on family because family is the most important thing in my life.” Glen began helping his mom as she managed rental properties. He wrote leases, showed houses, and negotiated with renters. He also did home repair, though “I barely knew how to hold a hammer.” Experience, plus YouTube instructional videos, improved his proficiency in renovation and construction. Glen’s mom asked if he wanted to pursue formal education. He said no. As moms do, Glen’s persisted. The deciding factor was the arrival in the mail of an edition of Pima’s Career Focus (like the one you’re reading now). He enrolled part time in fall 2018, and took 12 credit hours each semester in spring and fall 2019. His goal is to work as an electrician and in Heating, Ventilation and Air Conditioning and he believes his background as a scholar will be a selling point to future employers. 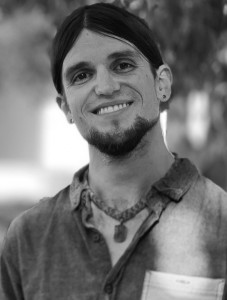 MAGNUSON: ORDERING UP A NEW FUTURE

Magnuson attended a Baltimore-area community college and the University of Baltimore for a few semesters before working full-time as a server in high-volume restaurants in the city’s tourist hub. After 10 years, he’d had enough of ungrateful customers and diﬀ icult bosses. He came to Tucson to visit his uncle and aunt, finding work in Tucson restaurants, but remained dissatisfied with his career path.

A friend asked if he’d thought about returning to college. Together they looked online at Pima. Magnuson’s father is an electrician, and his uncle has decades’ experience in welding and HVAC.

He decided to pursue a degree in welding because of the artistry possible in the profession, as well as the attractive entrepreneurial potential. He and his girlfriend may start a business, or may relocate outside the U.S. because welders are in demand worldwide. 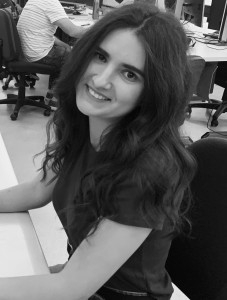 Zakharyan received a university-level education in architecture in Belgorod, a city of about 350,000 in western Russia. She moved to Tucson to be near her father. Her goal is to transfer and study architecture at the UArizona.. Pima’s Computer Aided Design classes are exposing Zakharyan to new digital tools for rendering objects. That’s the fun part, she said. The cultural transition has been “complicated,” but she takes comfort in the warmth of Tucson: “Everyone here smiles.”

Zakharyan received a university-level education in architecture in Belgorod, a city of about 350,000 in western Russia. She moved to Tucson to be near her father. Her goal is to transfer and study architecture at the UArizona.

Pima’s Computer Aided Design classes are exposing Zakharyan to new digital tools for rendering objects. That’s the fun part, she said. The cultural transition has been “complicated,” but she takes comfort in the warmth of Tucson: “Everyone here smiles.”

Mastering robots. Keeping the factory floors of the future up and running. Maintaining heavy diesel, electric and driverless vehicles.

Students at Pima Community College’s $45 million Center of Excellence in Applied Technology will be working not only with the machinery of today but with technologies that only a few years ago were science fiction. The center, scheduled to go online in 2021, will allow Pima to double or even triple the number of students it can teach in Career and Technical Education, a catch-all term for a variety of disciplines united by growing employer need, and by high salaries and wages.

The Center, located at Pima’s Downtown Campus on Stone Avenue and Speedway Boulevard, is focused on three areas

“At the Center, students will be learning skills that employers want both now and in the future. We will be adapting our coursework to quickly match the changing needs of industry and of our learners,” said Greg Wilson, Dean of Applied Technology. “In short, students will learn how to operate lots of cool stuﬀ .”

Planning of the Center began in 2017, when Pima brought together its faculty, administrators and students, who met with industry leaders, educators from around the city and state, and residents of Downtown Campus’ surrounding neighborhoods in the 85705 ZIP Code.

The Center will be the hub of community revitalization through Thrive in the 05, a multi-faceted initiative. Along with Pima, this multi-agency place-based eﬀort includes collaboration with partners that include Arizona State University’s School of Social Work, which is leading crime-prevention initiatives, and the City of Tucson, which is working to bring aﬀ ordable housing and economic opportunity to the area.