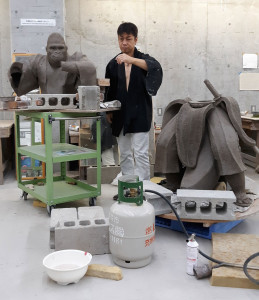 This past summer, public art sculptures of giant desert animals that he co-created were installed along Valencia Road. In 2021, one of his sculptures, a tribute to his grandfather who survived the U.S. nuclear bombing of Hiroshima during World War II, will be part of two exhibits in Japan.

Tashima has been part of Pima’s Visual and Performing Arts Department since 1999. He has exhibited, studied, taught and lectured around the world, including in Denmark, France, Hungary and New Zealand. He has public art installations across the county and state.

The sculpture in the upcoming exhibitions, “Little Boy (Hiroshima atomic bomb) Yellow Banana Kong – Give Peace a Chance,” is a tribute to his grandfather, a Hiroshima firefighter. It will be part of his solo exhibition at Osaka’s Yoshiaki Inoue Gallery. It also will be part of the International Ceramics Festival in Mino, Japan. Because of the COVID-19 pandemic, organizers of both exhibitions postponed them from 2020, the 75th anniversary year of the Hiroshima and Nagasaki bombings.

When he was growing up, Tashima says he regularly visited his grandfather, Kaoru Date, in Hiroshima, often going to the museum established at the hypocenter of the bomb’s explosion. Date, his mother’s father, would recall the bombing on Aug. 6, 1945. The day before, Date’s grandmother insisted he visit her outside the city. She then hid his bicycle so that he couldn’t get to the train station in time for the last train of the night back to Hiroshima.

“The next morning, on his way to the station at 8:15, he saw the light, then heard the huge sound of an explosion and saw the mushroom cloud,” Tashima said.

The bomb instantly killed an estimated 80,000 people. It took Date all morning to get to his Hiroshima fire station, where he found only skeletal remains of his colleagues. For two weeks, he helped survivors under the nuclear fallout, in secondary radiation, which caused his hair to fall out and his gums to bleed. He died when Tashima was in high school.

“This sculpture series is hoping for peace and friendship,” he says. 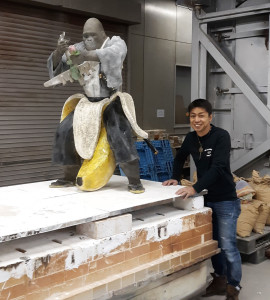 In “Little Boy,” Tashima represents himself as a 5’3” King Kong emerging from a banana peel holding a broken Boeing B-29, the type of plane that dropped the atomic bomb on Hiroshima.

Check out Pima’s Classes and Instructors

If you are interested in the visual arts and want to learn from some of the best, check out Pima’s art class offerings in the current schedule of classes. Search under the subject code ART.

Also, you can view the work of Hirotsune Tashima and Pima’s other full-time faculty featured in the Visual Arts Faculty Exhibit 2020  —  at pima.edu/cfa-gallery. And here is a sample of other recent showings by the College’s Visual Arts instructors:

Featured at the Tucson Museum of Art 4×4 Exhibition:
tucsonmuseumofart.org/exhibition/4×4/

Featured at the Tucson Museum of the Art Biennial 2020:
tucsonmuseumofart.org/exhibition/arizona-biennial-2020/